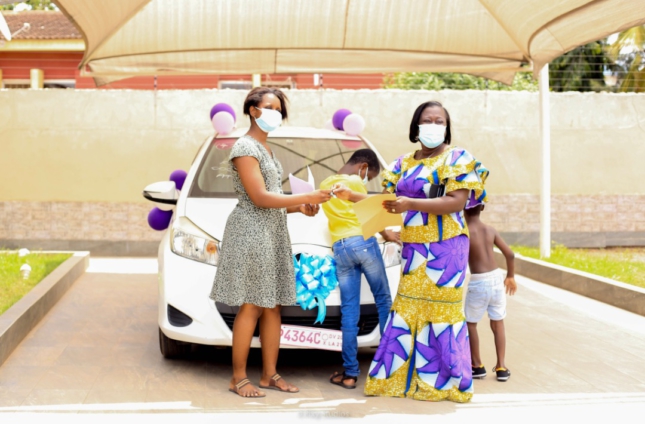 Klicks Africa Foundation has donated a Toyota Vitz to a single mother of autistic children to enable her to start a taxi business from which she could earn a monthly income to sustain her family.

The mother, Adama Barry, is taking care of her special needs children all by herself after their father abdicated his responsibilities and has not been seen for more than a decade now.

Besides being on the autism spectrum, Adama Barry’s two children are also blind.

Tipped by a colleague who had heard of Adama’s story, the Founder of Klicks Africa Foundation, Mary Kuffuor, as a parent of a child with special needs herself, saw the need to do something life-changing for Adama.

“When we met, I knew right from the beginning it was going to be very difficult for her to work because she has become the caregiver for these two children.”

“I also visited them in the house and I noticed that where they were staying wasn’t very conducive. I asked myself immediately what we can do? Because I couldn’t just tell her to go and try therapy: where is she going to get the money from and how is she going to sustain it?” she quizzed.

Determined to help Adama, Mrs Kuffuor, through her foundation’s Facebook page, appealed to friends, colleagues, and other members of the public to help raise funds to support Adama’s family.

“We did a four-minute video on Facebook and then I used the opportunity to appeal to all of my friends that follow my page to donate so that we can do something to change this young lady’s life,” she says.

Within 24 hours, ¢24,000 had been raised through Facebook and Klicks Africa Foundation added ¢13,000 to make a sum of ¢37,000. The funds were then used to purchase the Toyota Vitz vehicle, which was registered in Adama’s name for use as a taxi.

Adama, the mother of 12-year-old Mariama and eight-year-old Baba, received the car at the offices of Klicks Africa Foundation in Accra on April 23, 2021.

She says even though she dreamt of starting a taxi business, she did not think it would become a reality this quickly.

She added: “I hope this is an inspiration for every mother out there who is so frustrated with kids like Baba and that there is always hope. I keep on saying, don’t hide your [special needs] child; don’t be ashamed of your child and don’t listen to what people say, that you are a curse, or that you didn’t do well in life. Nobody should make you feel that way.”